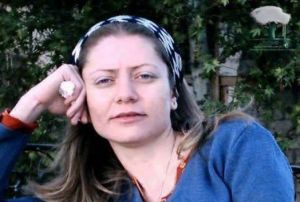 On December 4th 2013, Razan Zaitouneh appeared for the last time, on a video she had herself recorded, which was then relayed on the internet soon after by NGOs. She appeared pale, yet calm and determined. She went on to denounce, yet again, the violations of human rights in Syria and described her harsh living conditions in Douma. Five days later, she was kidnapped with three of her friends. Since then, there has been no news. Trained as a lawyer, Razan Zaitouneh remains one of the foremost figures of non-violent resistance in Syria. A resolute pacifist, founder of the Violations Documentation Center NGO and of the humanitarian organisation Local Development and Small Projects Support, she was banned from leaving Syrian soil in 2002. It is her unwavering commitment to human rights which has attracted recognition from the international community. In 2011, she was awarded the Sakharov Prize for her freedom of thought by the European Parliament and, in 2013, the International Women of Courage Award. Lest we forget.

An economist and professor of law from the Uyghur minority in China, Ilham Tohti embodies a voice both free and critical of the Chinese government, notably of its policies concerning Uyghurs. As a moderate, he has always strived for open-mindedness and thoughtful debate, in particular on the subject of relations between Hans and Uyghur populations. He is first incarcerated in 2009 by his critics before being freed a month later. He is arrested again on 15 January 2014 during a muscular and disproportionate operation at the hands of the Chinese authorities. His awful prison conditions, which involve leg-strapping and being denied food, left him weakened during his trial at which he was condemned to life in prison for “separatism”. In spite of the emotion triggered and the denunciation of the verdict by the European Union, as well as NGOs such as Amnesty International and Human Rights Watch, the verdict is confirmed on appeal in November 2014. His conviction makes the Uyghurs’ situation even more sensitive and delicate. The festival, and the evening around “Uyghurs, victims of recognized discrimination” particularly, are dedicated to him.