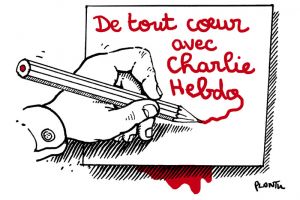 Drawing for freedom and tolerance The twenty political cartoons exhibited at Grütli were selected by Cartooning for Peace among the many expressions of solidarity from around the world in response to the attack against the satirical newspaper Charlie Hebdo in Paris on January 7, 2015. Beyond the emotion that these drawings strike up, they all do so in their own particular way, revealing their creators’ attachment to the universal principles of freedom, tolerance and brotherhood. In order to practice their art and promote these principles, artists and cartoonists should be able to exercise the fundamental right enshrined in Article 19 of the Universal Declaration of Human Rights: Freedom of expression. This exhibit can help advance the values of peace and tolerance. Let us hope that democracy and education will always be preferred to dictatorship and obscurantism.
Plantu and Chappatte co-founders of Cartooning for Peace in 2006, Swiss Foundation defending freedom of expression in a spirit of dialogue
It is with great sadness and revolt that the FIFDH pays tribute to Charlie Hebdo, our partner in 2008 and 2010. Notably, we had the opportunity to meet with Cabu and Wolinski. We were inspired with the same spirit and will to join the uncompromising fight against attacks on human dignity. In massacring 17 people, the Islamist terrorists are seeking to eradicate these core values. However, as demonstrated by the mobilization of 4 million French citizens, they did not succeed! After this, it is time for resistance and discernment. We must condemn antisemitism, obscurantism, prejudice against Muslims, and all forms of racism. Freedom of expression allows for us to laugh at symbols, it does not allow the spread of hate and violence against people. As friends of the artists who were assassinated, we will continue to fight in their memory.
Leo Kaneman and Isabelle Gattiker, FIFDH 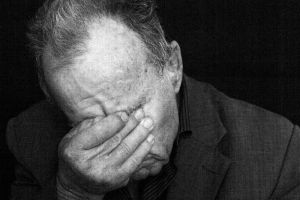 Repression and torture have been one of the main axes of oppression under Bourguiba’s regime, as well as under Ben Ali’s. Po- litical militants, human rights activists, freedom of speech defenders or students: a large number of people have fallen victim to their violence, mistreatment, harassment and acts of psychological and physical torture. However, prior to the popular uprising between December 2010 to January 2011, Tunisia remained one of international tourists’ favourite destinations. This exhibition of 34 black and white portraits is the result of an encounter between men and women, who tell a heavy and painful story. A story that marks an entire people. This initiative was created jointly by the artist, Augustin Le Gall, and the World Organisation Against Torture, in order to search, within the past, the strength for the future.
Vernissage on March 6 at 6:00pm | A drink will be offered by the Federal Department of Foreign Affairs (DFAE)

by Manuel Salvisberg and Ai Weiwei 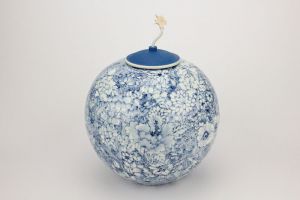 The Freedom Flowers Project (FF) by Ai Weiwei and Manuel Salvisberg refers to Chairman Mao’s “Let a hundred flowers bloom” campaign (1956) which led to the demise of China’s intellectual opposition at that time while the same party is still in power today. FF intended to combine elements of China’s cultural and political history and present. 100 Freedom Flowers stand metaphorically for 100 Chinese human rights activists selected by Ai Weiwei, who designed a floral pattern including 100 flowers which would have been tattooed on Manuel Salvisberg and painted on 100 vases as well as published on a website including the bios of the 100 activists. The project’s execution was prohibited by the Chinese authorities in May 2014. 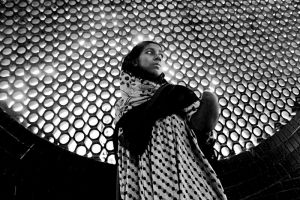 In Dacca, fire is an ever-present menace for this megalopolis which hosts a number of confection workshops. The buildings in which we find these textile workers rarely respect security norms. These poor working conditions were brought to light during the collapse of Rana Plaza in April 2013, which led to over 1100 deaths. In his Deadly Cost of Cheap Clothing series Abir Abdullah, who received the Leica Prize - Reportage from the Vevey International Photography Award 2013/2014, presid- ed by Bettina Rheims, documents the Tazreen factory fire, working without comprise, notably by photographing the bags of lifeless bodies heaved out of from under the debris.
The images of this series may offend the sensibilities of visitors.

Pitoëff | 1st Floor | Co-presented with ATD Quart Monde
Behind the abstract word of « migration » stands the hope of thousands of people, who each have their own story. The core of this exhibition is comprised of sketches of refugees’ travels, of their « journeys of hope ». Through these sketches, their authors tell with images the long story of escape from their homelands all the way to Switzerland. 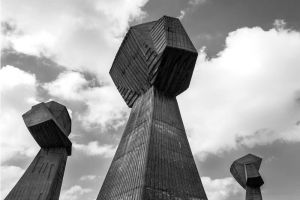 Alberto Campi’s photographs fall within an ongoing research on the monuments of former Yugoslavia. +38, the project’s title, refers to the international phone prefix retained by the states which emerged from the country’s dissolution. Just like the prefix, these memorials function like marks of a shared past. The photos suggest that despite its eternal appearance, memory engraved in stone isn’t necessarily permanent, that it can still be challenged and that memorials do not protect from new conflicts.
Photographs by Alberto Campi

Pitoëff | Café Babel | Co-presented with Kristian Skeie
In 1994 in Rwanda, in the course of a hundred days, 800’000 Tutsis and moderate Hutus were brutally killed by Hutu militia. In 1995 in Bosnia and Herzegovina, in the course of a few days, over 8’000 Bosnian Muslims were massacred by the Serbian forces. Both genocides were ignored by the international community. Today, we are obliged to ask ourselves how people, in the aftermath of such tragedies, can find the path to forgiveness, to reconciliation, and ultimately, to reconstruction.
Photographs by Kristian Skeie